Troup County Sheriff’s Deputies have apprehended a person wanted for questioning for the apparent murder of a man in Virginia.

Deputies arrested Kenneth Carter Staples, of LaGrange, in connection to a homicide in Clifton Forge, Virginia.

Investigators with the Clifton Forge, Virginia Police Department found the unidentified victim during a welfare check on Monday afternoon.  Officers entered the home and found the male victim lying on the floor with apparent head trauma.

Virginia authorities did not reveal Staples’ connection to the victim, only saying he had a warrant for grand larceny and the theft of a white Ford F-150 belonging to the victim. Police believed he was headed back to Georgia after being spotted at a gas station in South Carolina.

A lookout warning was subsequently issued for Staples. Troup County Sheriff’s Deputies later spotted a vehicle he was thought to be traveling in on the square in LaGrange around 11:26 a.m. on Tuesday morning. Sheriff’s Deputies then conducted a felony traffic stop on the vehicle near the Northside Package Store on New Franklin Road and took Staples into custody.

Staples, age 41, was arrested and transported to the Troup County Jail, where he is being held for the warrants and questioning.

This incident is still under active investigation at this time and further details will be released once they become available. 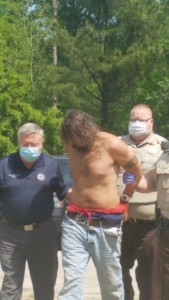 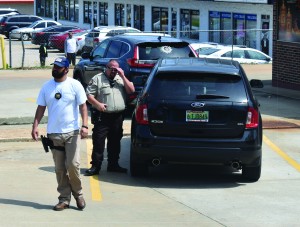 The suspect vehicle, a black Ford Edge, was later towed and taken into evidence.