It was hectic. It was exhilirating. It was heated, and it was scary good. Above all, it was fishing of a different kind.

Amanda Horner, the Senoia lady angler, was not using a rod and reel. She was not fishing with an artificial lure or live bait. Horner was fishing from a 20-foot boat called the C-S.

What she did on Sunday afternoon was crazy ridiculous, and she is glad she did it. No doubt. Horner went fishing with a bow and arrow, and she made a top of the line catch. There was some fishing line attached to her bow and arrow.

Horner, the sharp-shooting lady angler, found her target and caught her fish of a lifetime. Horner muscled up and took down a 45.3-pound carp on West Point Lake.

The rest is fishing history. Horner flirted with the bloody state record. She fought her fish, and then fought it some more.

“It took 15 minutes to get it in. The fish started taking line (immediately). It just about took my finger off,” said Horner.

She hasn’t forgotten a thing about this fishing trip.

“We snuke up on him. I was trolling around the banks. This was a challenge (and then some). But I practice shooting a lot, and I come here every weekend,” Horner said of West Point Lake.

The lady angler was fishing in three feet of water. Her eye sight was plenty good. Her aim with the bow and arrow was even better. Nick O’Neal of Senoia was with Horner.

O’Neal was doing more than sightseeing. He was also pulling, fishing and stressing.

“I was working. It was fast-paced. We knew the fish was big,” said O’Neal.

Other than that, he had this to say, “It was complete chaos (on the boat).”

But Amanda Horner caught the fish of her dreams, and she did so with a bow and arrow. Horner and O’Neal took the mammoth carp home with them.

“We’re going to use it as fertilizer,” O’Neal said sarcasticly. 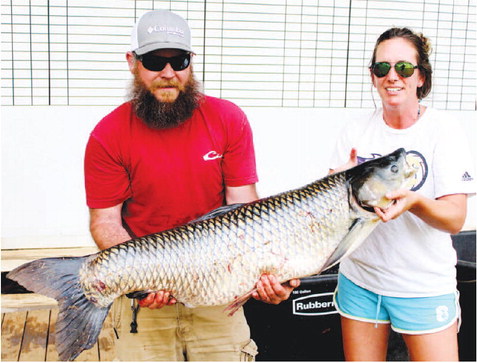 Nick O’Neal and Amanda Horner had a hard time holding up this 45.3-pound carp. Horner caught the fish with a bow and arrow on West Point Lake on Sunday afternoon.

Volunteering at the Warming Center