Red Sox Edge the Marlins, 5-4, Kunchala Contributes for the Sox

All season long, Pradeep Kunchala has been soaking up the baseball atmosphere.

The India native has been learning his lessons on the diamond, in the outfield and with a bat in his hands. Kunchala plays for the Red Sox in the West Georgia Men’s Baseball League in LaGrange.

Kunchala is one of the guys. He plays hard choppers off his chest. He uses both hands to catch fly balls. He smiles a lot. He encourages his Red Sox teammates.

He spits in the dirt. Above all, Kunchala is getting Americanized through the game of baseball.

“This is the first time I’ve played baseball. I’m used to playing cricket. It has been my dream to play baseball,” said Kunchala, who has lived in the United States for a year and a half.

He is doing alright for himself and the Red Sox. Kunchala is learning as he goes, one inning at a time. He is upping his game, and he is helping his team.

Kunchala is getting the baseball basics down. He is getting some West Georgia red clay on his uniform, too. “I’m hitting the ball okay. I like trying out new things. Baseball takes hard work and practice,” said Kunchala.

He and the Red Sox had a profitable night on Thursday with a 5-4 win over the Marlins at the Harris Baseball Complex. Kunchala contributed a single to left field in the top of the fifth inning.

The Red Sox are glad to have him on their team. Kunchala is relentless and persistent. His non-stop work ethic is also rubbing off on the Red Sox. In the fifth inning, with the help of Kunchala, the Red Sox took a 5-0 lead with a Hunter Rollins single, a Joseph Shaw bases-loaded walk and of course, the Kunchala base hit.

Kunchala and the Red Sox scored in the first and third innings, too. In the top of the first the Red Sox got a Manny Scott RBI single for a 1-0 advantage. The Red Sox would then snare a 4-0 lead in the third inning behind a Reeves Payne bunt single, an Austin Wilson two-RBI base hit and a Chris Cothran bases-loaded walk.

“We’re making plays in the field, and we’re producing at the plate. We are coming together as a team,” said Payne, the Red Sox first baseman.

The Marlins put some runners in motion as well. They shaved the Red Sox lead to 5-3 in the bottom of the fifth inning. The Marlins were talking some smack after a Cory Matticola single to right field, a Denatay Heard basesloaded walk and RBI and a Walt Taylor RBI single.

Will Smith also delivered with a bases-load walk for the Marlins third run. In the sixth inning the Marlins rallied once more with a Brandon Smith single to center field and a Bo Griffin run-scoring single to left field.

With the score at 5-4, the Marlins came within an inch of tying the game as Jake Hembree was thrown out at home plate after a Red Sox wild pitch. Catcher Drew Campbell retrieved the errant throw and tossed the ball to Red Sox pitcher Manny Scott, who put the tag on Hembree for the final out of the game.

With that play and the win, the Red Sox improved their record to 2-5. 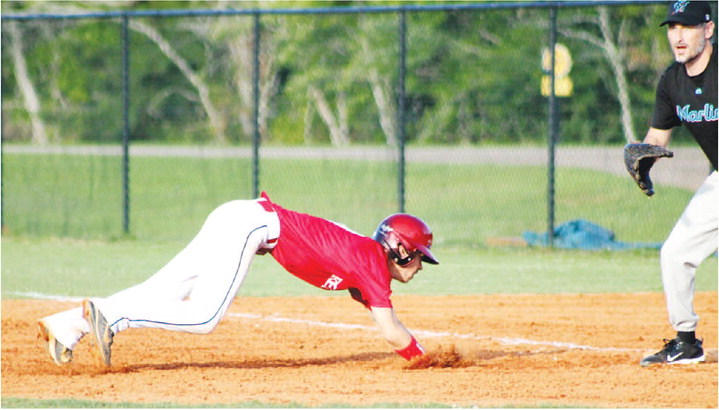 Drew Campbell of the Red Sox dives back to first base against the Marlins in a Thursday night game in the West Georgia Men’s Baseball League. 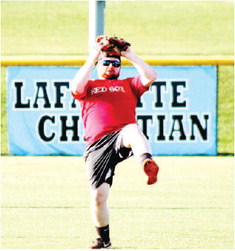 Shortstop Hunter Rollins plays some defense and makes the play for the Red Sox in a Men’s League baseball game against the Marlins on Thursday evening. 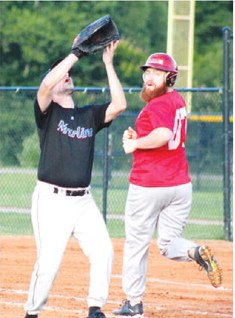 Red Sox base runner Joseph Shaw (right) checks out the defensive play from the Marlins in a Men’s League baseball game on Thursday night.