Special Awards were Given out at Rotary’s Annual Banquet

Rotary had its Annual Banquet at LaGrange College Thursday night. Susan Ferguson who has been the President of the Rotary for the last year led the meeting. Along with a nice meal, there were awards given out to honor people for their service.

Sheriff James Woodruff was given the Charles D. Hudson, Service Above Self Citizen of the Year Award for his outstanding commitment, service, dedication and loyalty to the community. This prestigious award is for someone that puts the community before themselves.

Our beloved and local Historian Clark Johnson was awarded the Barbara Henigin Above and Beyond Service Award. Johnson has had perfect attendance in the Rotary for 41 years. He has also faithfully put out the Rotarian newsletter to keep everyone updated on what is going on. Always willing to help, he can be seen at many events that are put on to help the community.

The Charles D. Hudson Service Above Self Award, Rotarian of the Year was awarded to Karin and Rod Thompson. Karin always makes sure that everyone is checked into the meetings, and that all new guests are recognized. Rodd built the check in system so that you only have to swipe your badge instead of having your name searched for on a list.

Another big honor of the night was to D. Lindner. He was passed the pin and gravel as the new President of the Rotary Club. Lindner has been a Rotarian for many years, and has been active in the Rotary and the community for many years as well. He accepted this position humbly, with the hopes that he will do a good job, and carry on the good works and programs that were started by the Presidents before him.

District Governor Court Dowis was also in attendance to help honor the award winners, and to help pin a new member that was inducted. 69th district representative Randy Nix who is also a Rotarian was in attendance as well.

A night full of good company, good food, and good fun, the Rotary Banquet was a wonderful night in honor of the many people that put the community before self. 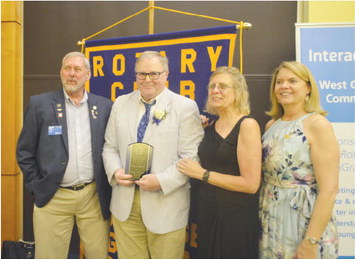 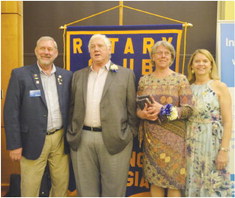 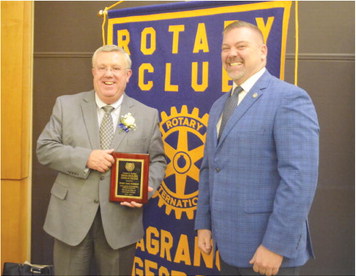 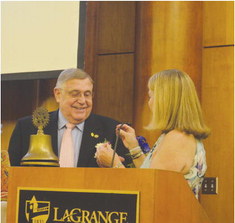 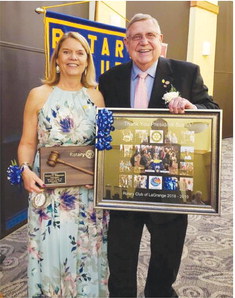 Susan Ferguson being given gifts from the Rotary as she steps down as President.